The Indian conglomerate’s market capitalisation was about $133 billion, overtaking the British energy giant’s $132 billion value at the close of trading on Tuesday. Reliance’s shares have increased at three times the pace of India’s benchmark index this year after its billionaire owner in August announced plans to cut the company’s net debt to zero in 18 months through measures including a stake sale in the oil-to-chemicals business to Saudi Aramco. 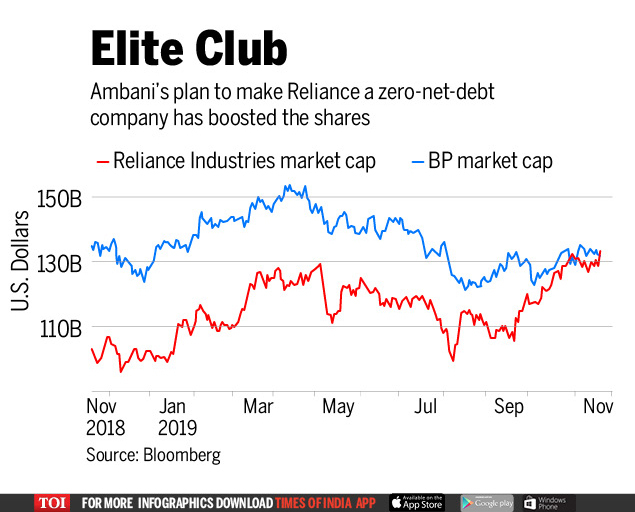 The surge in shares gives Ambani a net worth of $56 billion, making him Asia’s richest person, above Alibaba Group’s Jack Ma, according to the Bloomberg Billionaires Index.

Reliance’s market value briefly surpassed BP for the first time at the end of last month, and it has now regained the lead over the British company after its shares ended at a record high in Mumbai. It also narrowing the gap with PetroChina Co, currently Asia’s biggest oil company by market cap.

Reliance has increased 35% this year, compared with BP’s 1.2% gain as it works on cutting high debt levels. Oil companies have struggled because of swings in crude prices and as uncertainty persists over future energy demand.

Reliance, meanwhile, has benefited in a number of ways. It operates the world’s biggest oil-refining complex in western India, which can process low-quality crude and turn it into higher-grade fuels, partly protecting it from volatility in prices.

While Reliance gets two-third of its revenue from energy, Ambani has also made massive investments in telecom and digital services as he looks to benefit from growing demand in the world’s second-biggest market for mobile phone users. He has also expanded the company’s retail business to take on Amazon.com Inc and Walmart Inc.

Reliance is now the world’s sixth-largest oil company, with Exxon Mobil Corp topping the list with a market value of about $290 billion. Aramco, formally known as Saudi Arabian Oil Co, is planning an initial public offering with a valuation target of between $1.6 trillion and $1.7 trillion, which would make it the world’s biggest.